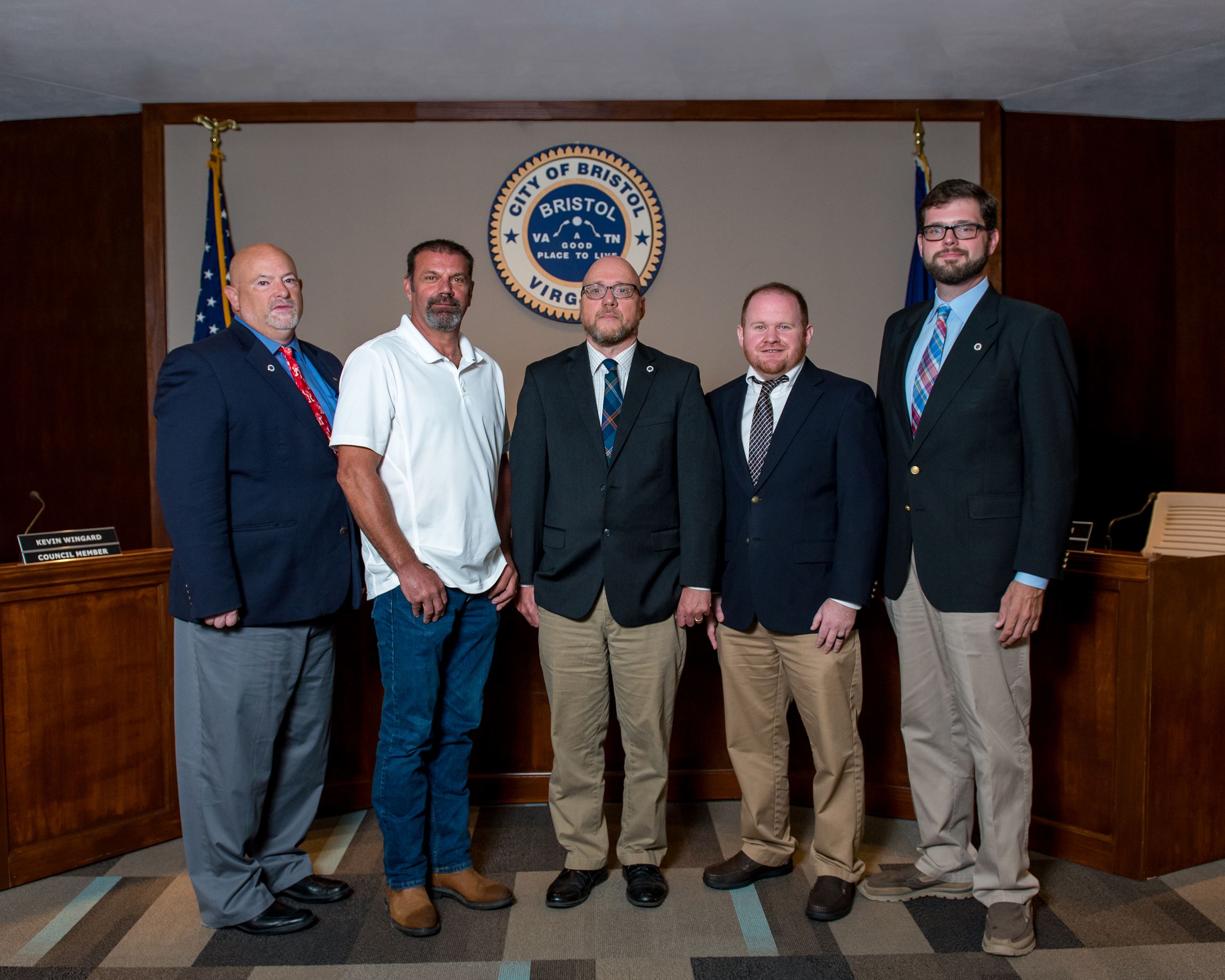 
Bill Hartley was elected to City Council on July 1, 2014. He was named Vice Mayor on July 1, 2019. He has served as both Mayor and Vice Mayor. A native of Bristol, Bill is a 1987 graduate of Virginia High School. He holds degrees from the Clemson University (B.A. History & Political Science), University of Alabama (M.A., History) and King University (M.B.A.). Bill has worked as an educator, non-profit administrator, and was named one of the Tri-Cities Business Journal's “Forty Under Forty.” He is currently employed at the Barter Theatre as the Advancement Officer-Institutional Relations. He serves as the council representative on the Bristol Chamber of Commerce, City Council Finance Committee, Economic Development Committee, Highlands Community Services Board, Bristol Convention and Visitors Bureau, Believe in Bristol, Bristol Youth Services Board, and Birthplace of Country Music. Hartley also is a member of the Bristol Rotary Club, Arts in Public Places Board of Directors, and Arts Alliance Mountain Empire Board of Directors. Bill and his wife, Harriet, have two young children, Wilson and Rachel.

Anthony Farnum was appointed to the Bristol, Virginia City Council in November of 2018.

Born and raised in Bristol, Virginia, Farnum earned a Bachelors degree from East Tennessee State University majoring in Public Health Administration with a minor in Economics.

Anthony has had a lifelong passion for real estate.  He works as a licensed real estate agent, as well as a landlord and property manager.  In his spare time, he enjoys sports and spending time with his family.

Anthony is married to his wife Amanda and they have one daughter, Juliette.

Kevin Mumpower was elected to City Council on July 1, 2016. He was named Mayor on July 3rd, 2017. Mr. Mumpower is a native of Bristol, Virginia, and graduate of Virginia High School, class of 1979. Kevin was a three-sport letterman at VHS, being named honorable mention all-state in baseball his senior year. He received a B.S. Degree in Electrical Engineering from the University of South Carolina and was commissioned as an Ensign in the US Navy in 1984. As a Naval Officer, Mr. Mumpower qualified as a Naval Submarine Officer and Naval Nuclear Engineer, receiving his “Gold Dolphin” warfare pin while serving aboard the USS Glenard P. Lipscomb (SSN-685) stationed in Norfolk, Virginia. Upon leaving active duty in 1990, he continued his naval service in the US Naval Reserves for 19 years and retired in 2011 as a Navy Commander with 26 years of total service. Mr. Mumpower has been employed as a Product Design Engineer, Manufacturing Engineering Manager, Operations Manager, Plant Manager, Sales Account Manager and Business Executive with several US manufacturing companies. He currently holds the position of Vice President of Product Engineering for Bristol Compressors International, LLC. Mr. Mumpower was elected to the Bristol Virginia City Council in May of 2016 and appointed to the BVU board as the Bristol Virginia Council representative serving a four-year term. He has also served as a Board Member for the Southwest Virginia Alliance for Manufacturers, and was the Chairman of the Board for the SVAM Center of Excellence, the new advanced manufacturing training center located in Washington County Virginia. Kevin and his wife Ginger reside in Bristol, Virginia and have three grown children Matthew, Madison and Megan. He is the Council representative on the Celebrate Bristol board, Mt. Rogers Planning District Rural and Technical Committee, Mt. Rogers Workforce Investment Area Consortium, and BVU.


Kevin Wingard was appointed to City Council in November of 2016. He was named Vice Mayor on July 1, 2017. Wingard, originally from Arkansas, moved to Bristol, Virginia in 1976 where he attended Bristol's public school system. Thereafter, he began a 13-year career at Electrolux while simultaneously owning and operating Southern Home Maintenance. Wingard then attended the Marine Mechanics Institute (MMI) and continued work for 10 years at local marine dealerships. In 2007, Kevin transitioned to self employment. Since that time, Wingard has invested in local real estate and additional business ventures in Southwest Virginia. He serves as the Council representative on the Bristol Department of Social Services Board, Appalachian Regional Juvenile Detention Center Board, Bristol Virginia Planning Commission, and various other appointments. Wingard and his wife, Sarah, have four children and five young grandchildren.

Neal Osborne was elected to the Bristol, Virginia City Council on May 1st, 2018 and was sworn in on July 2nd, 2018. He was named Mayor July 1, 2019. Neal is a native of Bristol. He is a 2006 graduate of John S. Battle High School and also attended Virginia Highlands Community College. He has previously been employed in the cellular sales field, and is currently employed as a car salesman.  He is the council representative on the Bristol Train Station Foundation, the Arts & Entertainment District board, the District Three Government Cooperative, Highlands Community Policy and Management, the Rhythm and Roots board, and the Transportation Safety Commission. As mayor, he also serves on the Chamber of Commerce board and on the Finance committee. He plays the guitar, and has one young daughter, Scarlett.